Check us out on Binge Now Network

Born in Harlem and raised in Queens, Onaje started playing piano at age 7. He graduated from Manhattan’s High School of Music and Art as well as SUNY at Fredonia.
In 1971, a gig with master guitarist Kenny Burrell at Baker's Keyboard Lounge in Detroit led to recording and sideman gigs with such artists as Norman Connors, Buster Williams, Cecil McBee, Betty Carter and Nat Adderley. He spent 2 years as pianist, composer, arranger in the band led by the late, great trumpeter Woody Shaw.

As a producer/arranger/pianist, Onaje has worked with other artists such as , Billy Cobham, Kevin Eubanks, Will Downing, Angela Bofill, and Cassandra Wilson. Producer of debut albums for vocalists Vanessa Rubin and Gregory Generet and for bassist Kenny Davis whose album featured among others, Geri Allen, Javon Jackson, Billy Kilson and Don Byron.
Signature arrangements: Woody Shaw(Rosewood),Phyllis Hyman(Betcha By Golly Wow and The Answer is You) and for Stanley Jordan(The Lady in My Life).
Solo projects include "Onaje" (Steeplechase - 1976/1995), "That Special Part of Me" (MCA/Zebra - 1988), "Dare to Dream (MCA/Zebra - 1991)", "Return to Form" (Half Note - 2003), "Remember Their Innocence" (Ejano - 2005), "Sack Full of Dreams" (18th & Vine - 2007) which was a Jazz Improv Magazine pick amongst best albums of 2007 and "Just Like Yesterday" (Pony Canyon - 2010). Onaje composed, arranged and performed the original score for the 1994 Showtime Network film, "Override", directed by actor/producer Danny Glover. He composed the score for an indie film entitled "Indelible". Onaje also has gained a lot of satisfaction as one of the instructors at the prestigious Litchfield Jazz Camp in Kent, CT.
Onaje is the featured pianist on Avery Sharpe's albums, "Dragonfly"(2005), "Legends and Mentors"(2008), "Autumn Moonlight"(2009),"LIVE"(2010), "Running Man" (2011) and Sojourner Truth, Ain'T I A Woman" (2012).

Onaje's concert presentation called " New Vintage" features an eclectic performance of Straightahead and Contemporary Jazz, Hip Hop, R&B, Spoken Word, vocals, instrumentals and in some cases, dance movement. He had a very successful one night engagement at the BAM Cafe in April of 2013. He will be returning for 2 nights in January of 2014.
A new solo piano project( actually a never released project from 1985) based on the music of the late, great drummer, composer Ron Shannon Jackson will be released on his Ejano imprint in 2014.
Onaje is a 2006 NAACP Image Award Nominee for Outstanding Jazz Artist for his album, "Remember Their Innocence". 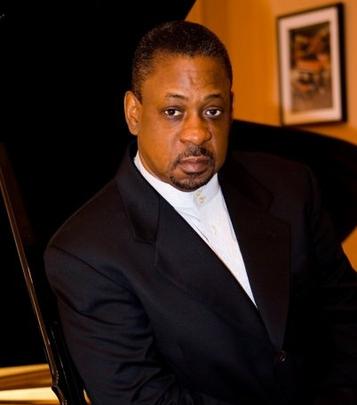