We have a season of projects we would like to mount. Momentarily we are in the midst of a very important fundraising endeavor to continue working on the progressing production of "WE TWO!" … A story of a tap dance performing artist father raising his daughter as a single parent. The trials and tribulations, ups and downs, joys and heartbreaks that it entails as they learn and grow from each other is what all parents can relate to. The game of golf is the backdrop to the telling of the story. As a documentary pursuit we will take advantage of an allegiance with EMVAD….A Film/TV distribution enterprise using digital streaming platforms. The original moth style Storytelling of the story will be part of the launch performance...A Father Daughter Story.

​Via a Strategic Alliance Agreement with EMVAD we garner accessibility to a global audience recently unavailable to us. It is paramount that we have the opportunity and access through an OTT Black Owned Online Streaming Enterprise. Decisions in receiving the green light for distribution of impactful artistic work in the hands of such an entity will only inspire us and other artists to move forward in their creations knowing immense exposure and monetization opportunities are possible.

Mission: To amplify Black voices of the African Diaspora and celebrate Black and Latinx excellence globally through the medium of digital Film/TV and Video distribution….An edutainment entity with purpose. Creative content of black history told through black voices, true enriched stories, biographies, science, fiction, comedy, instructional, and documentaries that educate, motivate, inspire, enlighten, and uplift will be the focus. Black / Latinx creative content owners of film shorts and feature Length films of dance, drama, comedy, science and science fiction, short stories, music, visual art, animation, and puppetry will have assistance in and the opportunity for their works to be exposed globally while being directly compensated via a revenue sharing agreement with the alliance entity. EMVAD TV Content Owner's Sample Agreement

EMVAD'S motto… We create. We produce. You create. You produce. Online Streaming...A Must. We do Exactly that.

Need: What is needed are financial supporters and sponsors that allows us to finance production of new content of works. Additionally, we seek to secure continual funding that allows for a guaranteed timetable whereby a completely financed budget allows for us to move forward expeditiously in advertisement, marketing, and promotion of the Film/TV/Video productions to establish a watch list. As the watch list grows we grow.

The EMVAD alliance entity has a subscription base audience from which ALEM will benefit. We seek to position ourselves through this initiative as an organization to succeed with or without a substantial subscriber base, initially. However, ALEM's financial responsibility for it's portion as suppliers of creator content which constitutes our overhead fees during the first year's push and beyond is a must.

Vision: In addition, together through ALEM and EMVAD we'll be seeking Black, Latinx, and Other owner creator content from the continent of Africa, Europe, North, Central, and South America, Indonesia and across the globe… wherever The Diasporas' reside. Networking with film and theatre festival curators and events to establish discussions for sustainable cooperation will be a focus.

​Creator content voices to be heard are essential, viable, and available. Historically, the equitable state of opportunity is where the lack prevails.

Solution: The EMVAD alliance team will be the opportunity entity for those who have the creative high artistry juices to produce on their own and bring forth to fruition their vision, but have not the ways and means of getting their voices heard via a global distribution network or any other feasible platform. That's where the EMVAD alliance entity comes into play​.

For your edification, attached is the fundraiser document for the most pressing endeavors we are engulfed in as these times dictate to survive. This particular route may well be the ultimate solution for our sustainability as an organization that just so happens to simultaneously include opportunities for others to benefit in the process.​

Together we rise to create and speak to that which need spoken. Enrichment, motivation, uplift, being impactful in our communities are the results when purposeful cognitive efforts are in play. 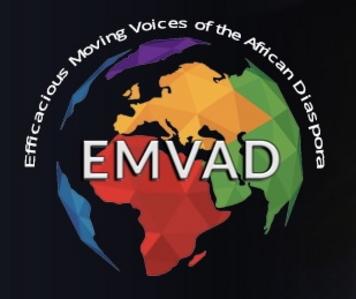